The YMCA of Greater Hartford has a long and proud history of working with our communities. The YMCA has played an important role in the lives of Hartford since its founding in 1852.

(Scroll down for branch historic highlights)

The YMCA in Hartford worked with young men drawn to the city looking for employment opportunities. The YMCA struggled in its infancy, but thanks to support from Colonel Charles A. Jewell and General Charles T. Hillyer it survived, incorporated in 1886, and built its first Hartford facility in 1892. 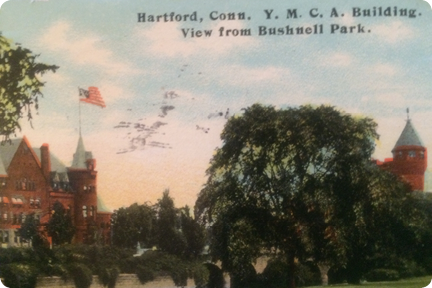 The Y offered its first structured camping program in 1886 and built the first indoor swimming pool in Hartford in 1892. Girls and women were accepted as associate members by a vote of the Board of Directors in 1963. The first female members were Mrs. Robert E. Green and her daughter. Hillyer Institute, later Hillyer College, took shape in the early 1900s. Educational courses had been offered at the Hartford YMCA as early as 1879. Hillyer later became part of what today is the University of Hartford.

In 1918, The Hartford County YMCA began serving children in 12 cities of the then poor rural areas. It provided many needed programs through a network of “YMCAs without walls.” Elmer T. “Pop” Thienes served his entire 31-year career with the County YMCA as its general secretary. The County Y established YMCA Camp Woodstock in 1922.

The late Robert C. Knox Jr. was a long-time YMCA volunteer, first with the County Y and later with the merged YMCA. To honor his commitment, the Board of Directors established the R.C. Knox Jr. YMCA Distinguished Leadership Award in 1977. It continues today as the Y’s top volunteer honor.

Today’s YMCA is made up of The Greater Hartford YMCA and The Hartford County YMCA, which merged in 1972. The merger was led by YMCA professionals Philip W. Breux and Donald Warrington, and dedicated volunteers like the late John Wallace and the late Frederick U. Conard Jr., which resulted in the YMCA of Metropolitan Hartford, Inc., commonly known as the YMCA of Greater Hartford.

The YMCA of Greater Hartford in 2018 served over 118,000 children and families, including 66,000 children, in personal development and educational programs.

ABOUT THE YMCA OF GREATER HARTFORD

The YMCA of Greater Hartford is a charitable association open to all and committed to helping people develop their fullest potential in spirit, mind and body. This commitment is reinforced by our belief in living out universal values of caring, honesty, respect and responsibility.

Our vision is three-fold:

The YMCA of Greater Hartford consists of 10 branches and two resident camps providing more than 100 programs and services in Hartford, Tolland and Windham counties.

YMCA CAMP CHASE was opened by the New Britain Y in 1963 as Camp Holiday Ridge and purchased in 1985 by the YMCA of Greater Hartford. Extensive improvements, including full renovation of the pool, were made in 1987-88. In 1991, the name of the outdoor facility was changed to Camp Chase YMCA to honor the generosity of the Chase Family. Each summer the Camp Chase facility hosts a YMCA Day Camp and a Family Swim Center.

YMCA CAMP JEWELL was founded in 1901 with the first camp site at Tunxis Island in the Long Island Sound. Thanks to the support from Col. Charles A. Jewell, for whom the camp is named, and other YMCA supporters, the camp moved in 1902 to the shores of Lake Swanzey, New Hampshire. In 1953, Greater Hartford YMCA General Secretary Francis E. Gray raised a then-record $565,000 for the purchase and construction of Camp Jewell and the YMCA Outdoor Center on 500 acres of land overlooking Triangle Lake in Colebrook, Connecticut. The camp celebrated its 100th anniversary in 2001 with the opening of Centennial Lodge.

YMCA CAMP WOODSTOCK was built in 1922 by the leaders of the Hartford County YMCA on a 125-acre site overlooking Black Pond in Woodstock Valley. The camp was run by the legendary general secretary of the County Y, Elmer “Pop” Theines. The camp received heavy damage during a hurricane in 1938, but was rebuilt. The rebuilding of the camp, despite significant financial obstacles, was urged by Pop, who believed such a place was needed to counter the darkness covering Europe at the time. Several new buildings were constructed following capital campaigns in 1987 and 1999.

DOWNTOWN YMCA Hartford saw its first structure built in 1892. It included the first indoor swimming pool in Hartford. Other structures were built in 1938, which housed locker rooms and a swimming pool, and in 1974 Hartford added the “Fit Zone," a residence floor and offices. The Industrial Management Club was established in 1939 and gave mid-level and line managers of the many manufacturing firms in Hartford a place for continuing education and socialization. In 1977 the branch established its first emergency shelter, Jewell House, for teenagers.

Recognizing that the YMCA was not doing enough to provide programs and services to families in Hartford’s other neighborhoods, we began expanding beyond our walls. We started the Minority Achievers Program in 2003. The Downtown YMCA Urban Initiatives program offers activities for kids and families at the Learning Corridor in Hartford’s South End. These were first steps in building opportunities for Hartford's residents.

In November 2015, the YMCA at the XL Center closed its doors and the new Downtown YMCA, located at 90 State House Square, opened. The new Downtown YMCA was designed for working adults, and offers a variety of classes, from indoor cycling and power walking to yoga and Read to Succeed, an adult literacy program. The Jewell Street building was sold in order to divest resources to local neighborhoods with new family centers. The Wilson-Gray YMCA in the North End of Hartford opened in 2009.

EAST HARTFORD YMCA programs began on a sporadic basis as far back as 1926. Consistent year-round programs have run since 1941. The current building on Main Street was built in a joint capital campaign with the YWCA and was dedicated on October 26, 1958. In 2001, the East Hartford YMCA bought the Main Street building and began the process of planning and fundraising for the current Teen Center that was dedicated in September 2007. Though the building on Main Street has been through a number of changes, programs in the community including child care, day camp, and swim team have been a common thread through the years. The branch today partners with many other East Hartford agencies to provide programs and service to all.

FARMINGTON VALLEY YMCA traces its origins back to 1918 when it was part of the County YMCA. It provided a multitude of programs, especially to young people, not provided at the time by the poor rural town governments. It was a classic “YMCA without walls,” providing opportunities in borrowed or rented facilities. The YMCA of Greater Hartford purchased the former Swim Center One in Granby in January 2001, and built a new state-of-the-art 70,000 square foot facility with 2 pools, a gymnasium, a climbing wall, group fitness studio, Family Activity Center, 2 babysitting rooms, a community room and much more! Farmington Valley YMCA continues to serve 14,000 members throughout Farmington Valley.

GLASTONBURY FAMILY YMCA Branch traces its roots to the early 1960s. Its emphasis has always been to serve youth and families. For many years, it provided statewide leadership to the YMCA Youth and Government Program. It has a highly successful gymnastics team involving hundreds children from preschool through high school. In 2016, the Glastonbury Family YMCA opened a brand new facility and, for the first time, offers an on-site Wellness Center, 100-seat community room and theater with professional sound and lighting equipment, Early Childhood Development Center, Child Watch, and Youth Program Space. The Glastonbury Family YMCA puts a strong emphasis on the arts and humanities, producing a full-length Broadway-style musical every spring.

HALE YMCA YOUTH FAMILY CENTER opened on February 27, 2016 and is named for Betty and Newell Hale, whose vision for a pool in the Northeast corner of Connecticut, combined with their generosity and commitment to the area, made the branch possible. It is a full service facility, offering an 8-lane competition-length swimming pool, a wheelchair accessible warm water pool, two group exercise studios, gymnasium, sauna & steam rooms and child care and teen centers. Camp Cutler opened in the summer of 2017, named in honor of the Doulas Cutler, former Town Administrator who was instrumental in the opening of the branch.

INDIAN VALLEY FAMILY YMCA Branch had its first presence in the region back in 1869. The Young People’s Christian Association charged $1 annually for dues and had a purpose of “promoting the social, intellectual and spiritual welfare of our village.” Not much has changed in the ensuing 132 years. Indian Valley traces its modern roots back to the organization of the Tolland County YMCA in October 1925 in Rockville. The Indian Valley Branch YMCA today is recognized as one of the premier human service agencies in its region. It is the largest provider of child care in its towns and provides a wide range of youth, family and adult programs based out of its home at 375 Hartford Turnpike in Vernon.

TRI-TOWN YMCA Branch was formed in 1949 as the South Regional YMCA. Programs began thanks to a grant from the Community Chest, now known as the United Way of the Capital Area. As a non-facility location, the branch has always found collaborative partners. An example is the current relationship with the Hartford Marriott in Rocky Hill, where the branch provides swim lessons to area children in the hotel’s pool. The name was changed in 1999 to reflect its increased role in all three of its service communities: Wethersfield, Newington and Rocky Hill.

WEST HARTFORD YMCA has some records of programs dating back to 1900. Hi-Y clubs were the first formal program in 1935. The first branch office was built in 1944 thanks to a donation from Miss Edith Howard. It housed a snack bar, dance floor, games and club rooms at 72 South Main Street. The current building opened in February of 1958 following a joint campaign with the YWCA.

WHEELER REGIONAL FAMILY YMCA Branch’s seeds were planted in Plainville in 1912. The Y became part of the County YMCA when that entity was formalized in 1918. By the 1960s the YMCA was providing valuable services to an increasing number of people with a new emphasis on opportunities for adults and families. The current building was built thanks to the generosity of Frank and Bertha Wheeler. It was dedicated and opened in January 1964. In 1977, it became the first branch in the Association to offer before- and after-school child care programs. The main building and an adjacent child care center were expanded and renovated thanks to a Metropolitan Capital Campaign in 1987. In 2004 the Wheeler Regional Family YMCA underwent another major renovation and expansion. Today, the Y services the towns of Avon, Bristol, Burlington, Farmington, Plainville and Plymouth.

WILSON-GRAY YMCA YOUTH AND FAMILY CENTER opened its doors on September 28, 2009. This family neighborhood destination serves as a town green-style community center for all of Hartford’s neighborhoods. The Wilson-Gray YMCA Youth and Family Center will be the centerpiece for collaboration between three organizations -- the city of Hartford, Community Health Services and the Urban League of Greater Hartford -- to provide services to these communities, where nearly half of all children live in poverty. The area has the city’s highest concentration of poor families. Through these collaborations we can help families, and young children in particular, reach their god-given potential in spirit, mind and body.